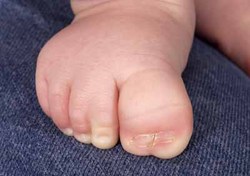 Subjective: A nail plate that has a longitudinal separation with partially separated nails, each with a separate lateral radius of curvature

The use of the word fused is not meant to imply that pathogenetically these nails were separate and merged. This is distinct from a split or cleaved nail, where the two parts of the nails share the same radius of curvature. The involved digits should be specified. It may be associated with underlying syndactylous digits, but these are coded separately.