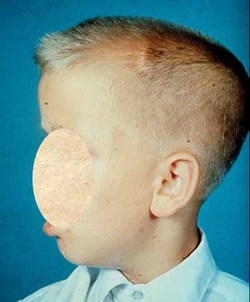 Head circumference is measured from just above the glabella (the most prominent point on the frontal bone above the root of the nose) to the most posterior prominent point of the occipital bone using a tape measure. Some standard charts are organized by centiles [Hall et al., [2007]], others by standard deviations [Farkas, [1981]]. It is important to add an indication of how far above the normal standard the head circumference is if an accurate assessment of this can be made. Macrocephaly is an absolute term. The term relative macrocephaly can be used when the head size centile exceeds the centile for height, for example, head size at the 75th centile with height at the 5th centile for age and sex.