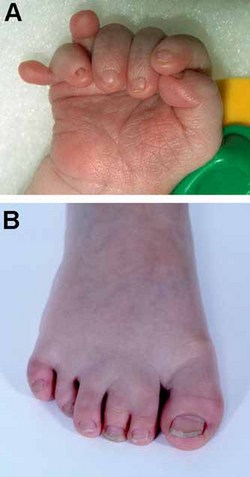 Objective: The presence of a supernumerary finger or toe (not a thumb or hallux) involving the third or fourth metacarpal/tarsal with associated osseous syndactyly

To determine this finding in the hand without using a radiograph [see Allanson et al., [2009b] this issue, for a discussion of the use of radiographs], the examiner grasps two adjacent metacarpals, each with a thumb and index finger on the dorsum and palmar aspect of the hand and attempts to independently maneuver the metacarpals. If they cannot be independently manipulated, osseous syndactyly is present [Biesecker, [2007]]. Consensus could not be reached on the utility of the bundled term of Mesoaxial polydactyly, so it is specified in the terminology for the time being. It is arguably superior to describe the two separate terms (e.g., Osseous syndactyly of F3,4 (metacarpal) and Postaxial polydactyly of the hand, type A). The term insertional polydactyly may be less desirable because the word insertion implies mechanism, which is unlikely to be an insertion. The utility of this term should be reviewed over time.