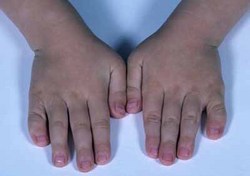 Subjective: A digit that is laterally curved in the plane of the palm

The curvature in this term is restricted to the phalanges and does not refer to deviation at the MCPJ/MTPJ (see Radial deviation of the fingers). Typically involves an abnormally shaped middle phalanx, but this is not obligate. The identity of the finger/toe should be specified and the directionality of the deviation. This finding is most common in F5, and is almost always radial, but can be seen in any digit and can be in either direction. A similar effect can be created by radial angulation within the distal phalanx with epiphyseal thickening, which is called Kirner deformity or dystelephalangy [Ozonoff, [1992]].