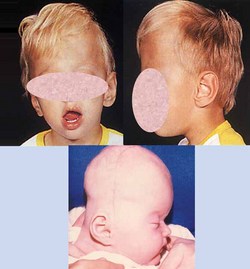 This feature may have previously been considered to overlap with or include a tall forehead. Turricephaly is present when the head appears tall (subjective) and head length and width are reduced compared to normal age-related standards (objective). Head length is measured between the glabella (the most prominent point on the frontal bone above the root of the nose) and the most prominent part of the occiput in the midline, using spreading calipers. Head width is measured between the most lateral points of the parietal bones on each side of the head, using spreading calipers. The term acrocephaly (or oxycephaly) is used when there is turricephaly and the top of the skull assumes a cone shape.