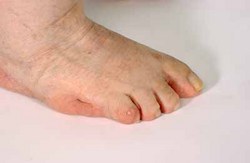 Objective: The absence of all phalanges of a non-hallux digit of the foot and the associated soft tissues

Note that this descriptor does not require absence of the metatarsal. The affected digits should be specified, although this may be difficult. In the latter case, the specified term should be Absent toe, right foot (with the identity of the missing toe not specified). This definition excludes Partial absence of the toe. This absent toe definition excludes Absent hallux because it is usually obvious if the missing digit is a hallux. It may be difficult to distinguish an absent toe from two digits with an extreme degree of osseous and cutaneous syndactyly. If all digits are missing, the term Adactyly should be used. The term Oligodactyly may be used as a synonym, but only in situations where the missing digit is not specified. For example, to state that a patient has Oligodactyly F5 is incorrect because the oligodactyly refers to the digits that are present and the F5 refers to the digit that is absent. This is awkward and could be confused with higher order deficiencies.