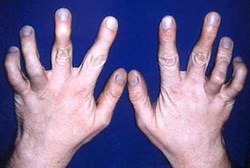 Subjective: The DIPJ and/or PIPJ of the fingers cannot be extended to 180? by either active or passive extension

Note that some restrict the use of the term to inability to extend the PIP joint of the fifth finger. We do not restrict the term in this way. This term should not be used if the patient has Clenched hand. A similar effect can be created by radial angulation within the distal phalanx with thickening of the epiphysis, which is called Kirner deformity or dystelephalangy [Ozonoff, [1992]]. The affected digits should be specified.